Thoughts, ideas and general ramblings of a SharePoint and Infrastructure Consultant in Vancouver, BC

This is one of those items that is here to remind myself more than anyone else, to be honest: if you don't change the theme in your SharePoint Hub Site from the default, any Sites associated to the Hub will not get the updated theme.

Additionally, the changes do take some time to push down, so be patient. However, if after some time you're not seeing the change, go back to the Hub Site and confirm that the theme has been changed from the default. In the case of my Communications Hub Site 'portal' the default theme was the blue we've come to love in SharePoint Online:

After converting the 'portal' Site to be a Hub Site using the Register-SPOHubSite PowerShell cmdlet, and then associating another Site with the Hub by way of Add-SPOHubsiteAssociation, I confirmed the theme was to be adopted from the the Hub Site: 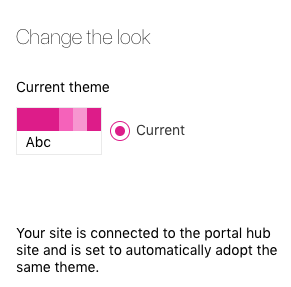 At this point, I began the waiting game...followed by some head scratching and finally a bit of sleep. The next day there was no change to the associated Site theme, so it was back to the Set up your Hub Site support article that would have saved a bit of time:

If the theme for the site that was converted to a hub site was never changed from the original theme assigned by SharePoint at the time it was created, any sites associated with it will not inherit the hub site theme.

Changing the theme in the Hub Site and then a brief wait resulted in the theme adoption as expected: 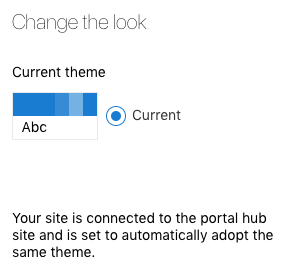 From here on in, I'm going to make a habit of changing the default theme on the Hub Site right after converting it as a matter of habit.